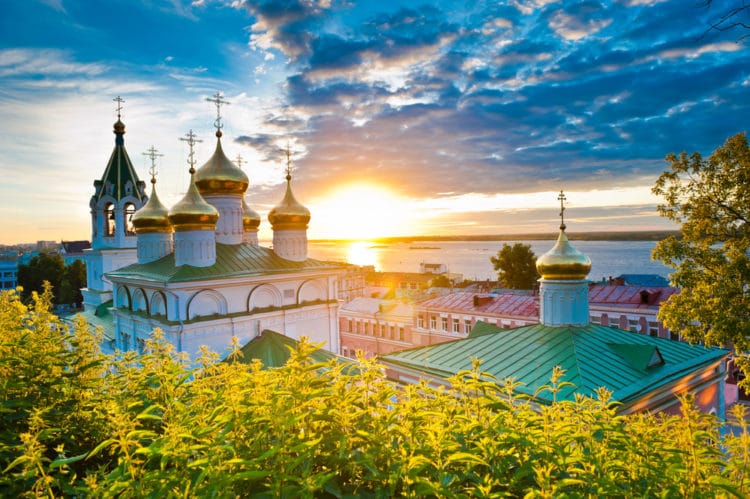 Our review will tell you what every tourist should see in Nizhny Novgorod. Study it carefully: the sights we recommend for Nizhny Novgorod are really unusual and fascinating.

What to see in Nizhny Novgorod first?

Few sights in Nizhny Novgorod are as famous as this one. The site was built in the 16th century - its original purpose was to protect the city from the Tatar army. The Kremlin wall stretches for two kilometers and has 12 towers to date. Take a trip to the Kremlin, and you can look at the Eternal Flame, visit the Philharmonic Hall and the art museum, restaurants and the Alley of Love. In order to climb the hill on which the landmark is erected, you can buy a ticket to the funicular. From the top you will see magnificent panoramas of the city.

If you don’t know what to visit in Nizhny Novgorod, and you’ve come to this hospitable city for a quiet holiday, go for a walk along its well-appointed embankment. You will be able to see the Stroganov Monastery, the bridge and the Oka River. In addition to viewing platforms, the area is famous for its monument to M. Gorky.

A legendary structure made in the shape of an eight and connecting two Volga embankments. The ladder stretches from the Kremlin to the Memorial to the Hero. In order to climb to the very top one has to climb over 440 steps. There are observation points at different parts of the ascent. Feedback from tourists and locals suggest that in the darkness, the framed lantern structure looks especially mysterious and romantic.

The length of the main, ancient and most colorful street of the city is more than 2 km. Note that it is pedestrian - it is impossible to drive on it by car. “Pokrovka” will allow you to see sculptures of Dostoevsky, Tolstoy and Pushkin. In addition, it is decorated with fun monuments and buildings with unusual architecture. There are stores, designer boutiques, cafes and museums. Children can show up on the steam train, and adults can enjoy performances by street musicians.

A 19th-century building created in honor of Alexander the Second’s visit to the city. In the days of Soviet power, the cathedral fell into disrepair, its valuables were looted and destroyed by fire. The last reconstruction was done 35 years ago. Now it is a cathedral with a rich history and beautiful interiors.

Check out the wonderful views of Nizhny Novgorod in this fascinating video!

People’s church, the facade of which is of particular interest. The exterior walls of red brick are decorated with exquisite white stone carvings. Note that at the time of the Soviet Union, the Nativity Church was one of the few that managed to survive (because of its historical value).

7. Church of the Nativity of John the Baptist on the Torg

What to see in Nizhny Novgorod in 1 day for architecture lovers? This object of the 16th century, famous for the fact that from its steps K. Minin summoned people to go to liberate the capital. Originally, the structure was wooden, and only later became stone. One of the main treasures kept here are the remains of John the Baptist and Nicholas the Wonderworker.

Date of construction - 14th century. In the monastery there is the unique Laurentian Chronicle (1377). The monastery itself is closed to guests (since 1924). But there is an opportunity to view the surrounding area with a restoration workshop, various structures and even a movie theater.

Cultural value located in the central part of the city. The building is made of white stone, and previously served as a night shelter and city archive, and later as a history museum. In the 20th century there was a bar, where the most famous artists of the country performed. Now Nizhny Novgorod authorities closed the bar cellar, because the house was awarded the status of historical heritage - here liked to rest Peter the Great, which gave the place its name. During the tour you can see the facade and the interiors of the building - you can admire the impressive high relief, the tile stove, the objects of the 17th and 18th centuries. A trip here will be especially interesting for lovers of Soviet and Russian history.

Pompous and rich building, which looks more like a giant medieval palace. The style is neo-Russian. The front part is dome-shaped and decorated with the coats of arms of Russia, the USSR and the city itself. Even the best hotels in Nizhny Novgorod cannot boast the same rich interior furnishings. In the spacious halls you will see luxurious images of luminaries and eagles on the ceilings, original semicircular windows and wall paintings by the greatest artists. The bank is active and can be viewed from the inside on a guided tour. Of particular interest is the hall with exhibits from the history of the State Bank.

Where to go in Nizhny Novgorod with the whole family? To one of the best zoos in our country. Despite the lack of state support, the pets of Limpopo are well cared for. Animals and birds live on an area of 7 hectares (the area is expected to expand). Among others, there is a contact zone: you can pick up and feed the animals (food is sold right there), and take memorable photos with them.

Inside you can see the unique artistic parquet and richly decorated walls. The building itself is decorated with stucco. The balconies of the second level are supported by atlantes. There is an area for rest - a courtyard with a veranda and a fountain. In the past this 19th century house was considered to be the most expensive and prominent in all Nizhny Novgorod. Today it is also of great interest: guided tours are held in the premises to learn about the lives of the mansion’s owners, as well as to look at historical displays from different years.

A unique structure located in the center of the city. After the fire, its reconstruction was carried out with funds previously allocated for the restoration of the Winter Palace. The house has historical significance, and is included in all lists of “Russia’s best sights“.

The expositions are based on paintings presented to the museum by Bogolyubov, Repin and other celebrated creators. As a result of the revolutionary events of 1917, there were also artistic canvases found in the private collections of noble families.

One of the most ancient stages in our country, opened over 200 years ago at the behest of Prince Shakhovsky. The prince was an avid theatergoer. And even had his own troupe, which included his serfs. Shakhovskoy was always personally involved in the selection of productions for his theater (in addition to performances were given operas and ballets). After the death of the first owner, the owners began to change regularly. The building has survived several fires and days of neglect. Today, honored and popular actors of Russia still perform on the stage. An interesting point is that absolutely all of M. Gorky’s works were staged here.

Telling about the main sights of Nizhny Novgorod briefly, it is impossible not to mention this house-museum, which works in memory of the great Russian writer. Inside are the creations of Gorky himself and those masters who once created works about the city. The premises hold 20th-century furnishings. In addition, there is a collection showing the things of the Venerable S. Sarovsky.

The first digital planetarium in our country, recognized as one of the best in the world. Regardless of climatic conditions, guests can look at the sky studded with stars.

Date of opening - 2014. The exhibits are tools and systems from the 19th and 20th centuries, which at that time seemed like real masterpieces of engineering, but today are gone into the irretrievable past. To go to such excursions in Nizhny Novgorod should be with an experienced guide. Otherwise you simply won’t be able to understand the meaning of some tools and mechanisms.

A new attraction open to the public 12 months of the year. You can watch the dolphins and seals. And you can become one of the direct participants of the show, swimming with the characters.

Cultural and entertainment complex, considered the largest European circus. Date of foundation - 1883. Of interest are all sorts of performances by touring troupes as well as a tour of the historic architecture of the building.

If you have ever visited those sights of Nizhny Novgorod, photos with names and descriptions of which we have now given for you, do not get upset. In addition to the mentioned values, the city is famous for such objects as:

The exhibitions tell about how the GAZ automobile plant was created and developed. You can look at retro cars (all in excellent technical condition) and archives of the concern. Among the exhibits is a truck GAZ-51 from Soviet times, Volgas and Chaikas. One of the goals of the museum’s founders is to increase the interest of Russians in the domestic automobile industry.

The cableway connected the right bank of the Volga River and Bor (city of the region). Guests are offered a ride in an enclosed cabin (no travel in windy weather). From the panoramic windows you can see the floodplains, backwaters and the endless river. Cableway and the cabins themselves regularly undergo scheduled technical checks for serviceability, so you can not doubt in the high level of safety.

A vast area covered by forests. The area has trails for hiking, a small zoo, a go-kart track, a movie theater, and amusement rides. Tired, you can rest on a bench and admire the verdant trees, enjoy the fresh air and the beauty of nature among the noisy metropolis.

The facility was built for the 2018 FIFA World Cup and, as a result, meets international standards. The possible number of spectators - 45 thousand people, the size of the site - more than 125 thousand square meters. Many exciting matches were held here, including the quarterfinals of the 2018 World Cup.

One of the most important waterways of our country. Along the course of the Volga there are many ancient cities, including Novgorod. Visitors are offered river rides from the local station. If you want to see the most beautiful places along the river, buy a boat ticket.

Nizhny Novgorod is a city rich in all sorts of attractions. Visit it should be every resident of our country. Read also about Sights of Tver and be inspired for your further journey around Russia. 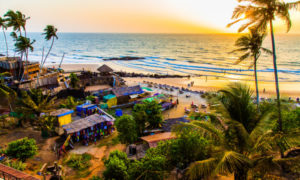 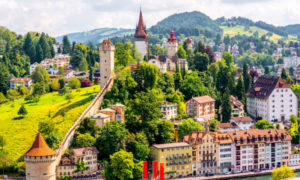