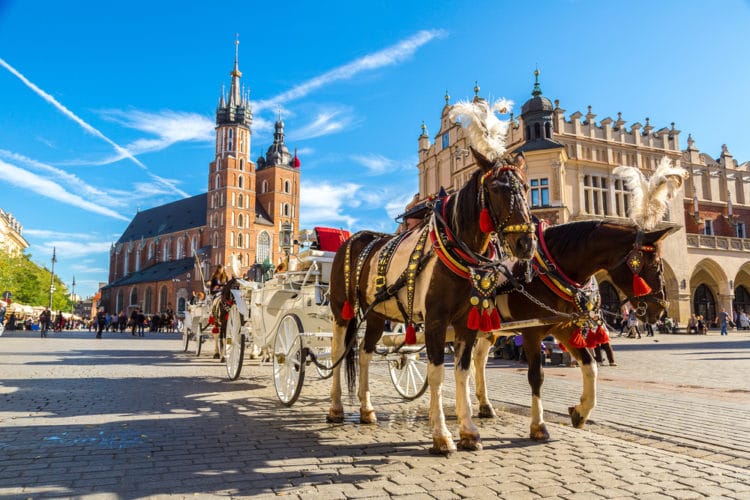 If you don’t know what to see in Krakow and if it is worth visiting this hospitable city at all, read our review. We have compiled a detailed rating, describing those Krakow attractions that every tourist should see.

What to see in Krakow first?

Many experienced guides in Krakow recommend to include a visit to the following cultural-historical and architectural sites in your sightseeing trip:

Small Basilica, built in the Gothic style. This Catholic cathedral complex includes several Renaissance chapels and a tomb in which the country’s national heroes, poets, and members of the Polish royal family rest.

2. Market Square and the Cloth Row

What should every holidaymaker visit in Krakow? The city square, which is the largest in all of Europe. It was built in the Middle Ages, and managed to preserve elements of the Baroque and Renaissance. Like many other top attractions in Krakow, it is decorated with courtyard galleries, portals, and attics. If you come here, you can see many other iconic Polish sites: the Mariatica Church, the Zbaraski Palace Complex, the statue of Adam Mickiewicz, and the Town Hall Tower. However, the greatest interest of travelers usually causes the Cloth Hall - a shopping gallery, set up during the reign of Boleslav the Fifth.

If you want to see all the interesting places in Krakow, prepare to go even underground. The catacombs are under the square and serve as a site for the Historical Museum. The museum rooms have numerous innovative multimedia equipment, recreating historical reconstructions. The museum’s collections include archaeological finds.

Feedback from guests and residents suggest that the building is one of the most beautiful not only in Krakow, but in the whole country. It is made in different architectural styles: laconic Gothic, elegant Renaissance and luxurious Baroque. The interior decoration is rich and opulent: a carved wooden altar with scenes from the Holy Scriptures, glittering gilding and sumptuous vaults.

Outdoor excursions in Krakow can be just as interesting. We recommend you go to the historical part of the city, and walk along a small street, looking at the colorful buildings in the style of classicism, baroque and renaissance. Here you can also see the Florian Gate (an ancient defensive structure), which gave its name to the landmark.

Feel the atmosphere of Krakow in this beautiful video!

Gothic stone and brick building from the 14th century, decorated with a dome with arched windows. If you do not know what to see in Krakow in 1 day, come here. The spiral stairs will take you up to the observation deck, which offers panoramas of the entire city. In addition, there are several museum exhibits in the interior, and in the basement there is a cafe that serves incredibly delicious and fragrant coffee.

Your trip should include a visit to this “city within a city.” Our recommendations are not coincidental: there are many religious and cultural sites of relevance to Jewish society here. Such as the temple of the body of the Lord and the monastery of St. Katharina. Note that it was here that the film masterpiece “Schindler’s List”, which recounts the horrors of the Holocaust, was created.

The building is located in the Jewish quartile. The exhibits relate to the events of the Holocaust, Jewish life, traditions and culture. In addition, historical and cognitive lectures, scientific seminars and conferences are organized here.

Another of the places to go to in Krakow is a must-see. The square is located on the site where formerly more than 20 thousand Nazi prisoners were held in terrible conditions and were waiting to be transported to Auschwitz. In memory of them and their suffering, there are memorial chairs made of bronze and cast iron on the paving stones.

The building stands about 230 m high on the top of the mountain. For a long time it was the center of the country and therefore deservedly belongs to the list of “Major Polish landmarks“. In ancient times, members of the royal family were crowned here and buried here. In addition to the castle itself, the architectural complex of Wawel includes the Cathedral Church of St. Stanislaus and Wenceslas.

A masterpiece of architecture and history, created in 1499. Originally designed to protect the Florian Gate, today it is used to host historical reenactments, sporting events and museum exhibitions.

12. Church of St. Francis of Assisi

A Catholic-Roman church from the 13th century, whose founder was Boleslaw the Fifth. The façade was only slightly altered in 19th-century renovations, and for the most part retained its original Gothic design.

13. Basilica of the Body of God

An old building from the 14th and 15th centuries in Renaissance and Baroque styles. In addition to the main building, there is a baroque bell tower. The key attraction of the basilica itself is the remains of St. S. Kazimierczyk (the famed Polish general).

14. Church of Saints Peter and Paul

The first Baroque church in the country, built of brick and dolomite. The building of 1635 is surrounded by a wrought iron fence with a sculptural composition of 12 figures of saints. The three-story facade is decorated with statues, niches, bas-reliefs, pediments and pilasters. The interior is more laconic and austere: wooden benches for parishioners, bas-relief pictures of the lives of the Apostles Paul and Peter. When examining the interior, be sure to note the huge central panel and altar pedestal with gilded sculptures.

Gothic architectural masterpiece created in the 13th century. The place where the monks live consists of 10 chapels arranged in 3 naves. The brick facade is decorated with gables, bas-reliefs and arches, tracery lattices on the lancet windows. Most of all tourists are surprised by the luxurious interior of the basilica: plant paintings on the walls, cross-shaped ceiling vault, high arches. Inside there are numerous stained-glass windows, frescoes, sculptural compositions, wood and stone sculptures.

It was built in the 11th century and later acquired Baroque features. Next to the church is a monastery of monks, which keeps ancient relics of the church. There is also a library with volumes of theological works.

A whole complex of church facilities, including a basilica, several chapels and a women’s monastery. Because of the location of the famous icon “Jesus, I Trust in You” and the remains of St. Kowalski, the sanctuary is a place of pilgrimage for believers from all over the world.

More than 100,000 students live in the city, mostly studying at the Jagiellonian University (Copernicus once graduated there). The main building of the institution is called the Great College or Collegium Maius. It is a three-story red brick building in the Gothic style with rectangular windows, an octagonal overhang, and several stepped gables. The courtyard has a well and an arched gallery. In the 20th century it was decided to convert the building into a museum. Buy a ticket and you can view pictorial portraits of the professors who taught students here in recent centuries, various globes, instruments of science (including astronomy), wood furnishings, visit the university dining room, ceremonial and lecture halls, and the teachers’ private quarters.

Originally a factory for the manufacture of metal ware. During the Jewish genocide, Schindler helped many prisoners escape death by giving them jobs in his factory. About eight years ago, a museum of his memory was set up on the factory grounds.

An avant-garde building with pointed roofs and a façade of glass. The complex is divided into different themed sections. In the vast rooms it is possible to see original compositions telling about the current problems of society: photos and performances, sculptures and paintings, conceptual expositions. In the local cinema halls are shown short films on the theme of being a modern person.

Krakow sights: what else to see in Krakow?

We have told you about the main attractions of Krakow in brief. If you have some free time, devote it to see such objects as:

One of the most extensive aviation collections in the country is housed in this museum from 1964. The open-air complex itself is built on the grounds of the former airfield and consists of several open hangars. The items on display include gliders, helicopters, and airplanes from various

countries (including Britain, America and Russia). Exhibited here are also all kinds of aircraft engines.

Former stained glass workshop. The items in the collections tell the story of Polish stained glass art. In addition to studying samples, guests are invited to view the process of producing beautiful pieces of multi-colored glass.

The number of specimens in the exhibits exceeds 8,000, and all of them are related to the culture, everyday life and history of the country. Many items belong to the 19th century, but there are just as many artifacts - archaeological finds from various earlier periods.

A visit to the museum is a must if only for the unique Da Vinci masterpiece “Lady with an Ermine”. At present it is the only painting by the genius artist still preserved on Polish soil. In earlier years, the museum was looted, and his works are now scattered all over the world.

The most important dramatic stage of the state, where the most famous actors, actresses and directors of Poland have worked and are working. You will be able to visit the theatrical productions of which the whole world is talking. For lovers of architecture, the theater building is also of great interest.

Memorial of 1823 in memory of the hero of the country - T. Kosciuszko. Around the mound is an ancient defensive structure. To visit the area you need to buy a ticket. You will be able to see the mound and the chapel-chapel of St. Bronislava. Recall that the mound is an artificial mound, so it offers great views of the entire city.

An old city zoo in Wawel, built by order of Sigismund the Third. After Krakow lost its title of capital, the menagerie began to deteriorate. Fortunately, its reconstruction began in 1929. Now there are over 260 species of animals, and the total number of pets is more than 1500. With the animals and birds you can make memorable photos against the background of beautiful nature.

In its early days, the garden’s area covered no more than 2.5 hectares. It served as a platform for the cultivation of ornamental flowers and medicinal plants. But later the botanical garden has expanded to 9.5 hectares. Rest in the clean air is offered no worse than the best hotels in Krakow can give guests.

The name of the park ring that surrounds the Old Town. In the 19th century, the walls of Krakow were demolished and replaced by trees. In all seasons this place has its charm: in the hot summer days there is a pleasant coolness, in the fall you will be protected from the rain with a dense thicket of trees, in the spring the Planty begins to green. The garden is arranged for recreation of citizens and guests of Krakow: there are benches and alleys.

The river stretches over one thousand meters (the longest in the country). It begins in the Carpathian Mountains and flows into the sea waters of the Baltic. Within the borders of the Vistula are several nature reserves and the most beautiful city parks.

We hope that the sights of Krakow, photos with names and descriptions of which you have now seen, have aroused your genuine interest. It is recommended to examine them together with a guide: from him you will also learn a lot of fascinating facts. Read also about sights of Warsaw and be inspired for your next trip to Poland. 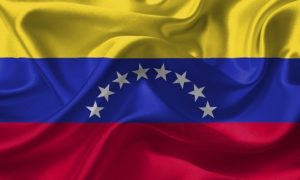 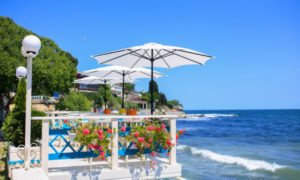 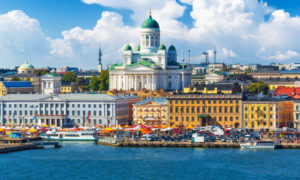 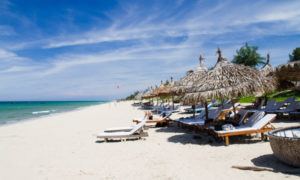