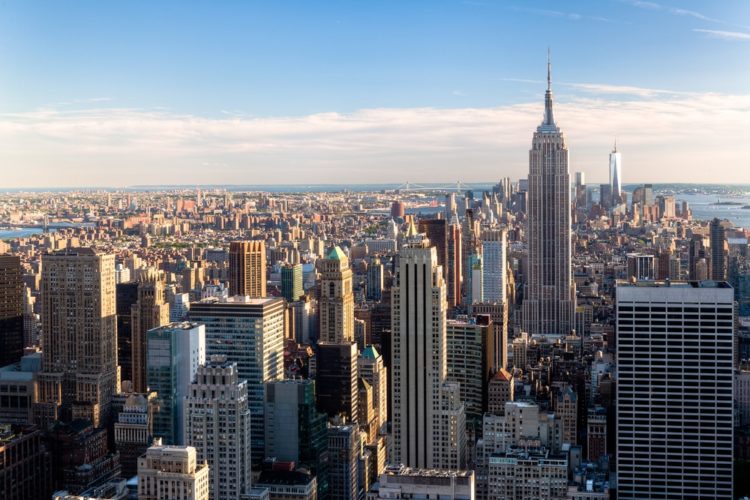 It is advisable to explore the many attractions of New York City with experienced guides. If you do not want to hire a chaperone, study our review carefully. We have compiled a detailed ranking of architectural sites, cultural monuments, entertainment complexes, and all the things every tourist should see in New York City.

What’s the first thing to see in New York City?

Which excursions in New York are most successful? Let’s try to answer based on guide recommendations and traveler reviews:

The world’s most famous statue is a gift to the United States from the French authorities. The monument is located on Liberty Island, which can be reached by boat. If you want to see it in person, go to Battery Park. There is an official ferry departing from here, and you should book your tickets well in advance. You can also take advantage of private carriers, but in that case you will be overpaid for the trip. On the sculpture is an observation deck, from which you can enjoy the panorama of the entire city.

An elite borough that is home to New York City’s key cultural and financial institutions. You can stroll through Central Park, Fifth Avenue or, say, Broadway, stop by Times Square or Wall Street. The sights of Manhattan are as varied and numerous as all the interesting places in New York City, despite the fact that the borough has a rather “compact” size.

A huge parkland that transforms the metropolis from a “concrete jungle” into a beautiful blooming island. You can see the park in a huge number of movies and TV series. The most famous points within this green space are the Lake, which in the wintertime gathers many skaters, the Zoo and the Strawberry Fields. You can walk around the area on foot as well as on a rental bike. If you don’t know what to see in New York City in 1 day, come here.

“Heart” of the theater district, which fell into near total disrepair during the Great American Depression (the theaters in the square were closed). Fortunately, the authorities were able to restore the landmark, and today it is home to such great corporations as Disney. In addition to company offices, the square is home to numerous restaurants, theater venues, and stores. Times Square is also included in the list of “New York City’s top attractions” because of the huge billboards that burn neon day and night.

Not sure where to go in New York City for a grand shopping experience? This chic avenue is home to boutiques and showrooms of the world’s most famous brands, including the Apple Store, Goodman, Tiffany, and Cartier. Shopping at the TOP outlets is optional. Even a walk or drive down a luxury street itself makes for a great experience.

Check out the wonderful views of New York City in this fascinating video!

A site that is included in all the “U.S. landmarks“ rankings. If you want a visit to the city to be an outstanding experience, go to a classic or contemporary Broadway show. The theater district on Schubert Lane is home to two of the most famous theaters formerly sponsored by theater baron S. Schubert, as well as Sardi’s Restaurant, where the world’s selebrities love to visit, and the Music Box Theater.

Another name for the place (because of the huge number of Ukrainian immigrants and immigrants from the former Soviet Union living here) is Little Odessa. Previously the area was interesting for its established transport links with other parts of New York and affordable housing options. Today Brighton Beach is a local landmark of great cultural and historical significance.

If you want to save time and money on shopping, head to this giant mall. Macy’s was New York City’s first major mall, created back in the 19th century by Roland Macy’s. The building of the department store occupies 10 levels: accessories, clothes and shoes here for every taste and purse. There are luxurious boutiques of fashionable designers, as well as outlets with budget goods, designed for a wide range of consumers. On the eve of Christmas, the “real” Santa Claus walks Macy’s, and the storefronts shine with thousands of lights. A grand celebration is also held on Thanksgiving Day (as well as its canon).

Many guides in New York City recommend starting your introduction to the metropolis with a tour of this train station (the largest on Earth). The facility is located in Manhattan and consists of a beautiful main building, a colorful central concourse with a chic interior and stately columns, 44 platforms on several levels and 67 train tracks. You can also admire it by watching various movies, such as Harry Potter.

An unconventional park complex built on the site of an abandoned railroad track. The square was shaped by the efforts of architects Joshua and Hammond. Enthusiasts collected donations from citizens, and brought their own project to life: a stone jungle turned into a real green oasis. The park is located 10 meters above the ground, and every year it attracts millions of visitors: both citizens and guests from around the world.

A public park area in the southern part of the metropolis, dating back to the 18th century. In former times this site was home to defensive structures protecting the city from the water. From Battery Harbor, you can see ships departing to Ellis and Liberty Islands and Staten Island. If you don’t know what to visit in New York City for a quiet time and outdoor recreation, go here.

The main symbol of Wall Street, rendered in shining bronze. There are always so many people wanting to take a photo with the huge statue that a whole line of people gathers on the street. It is believed that by taking the bull by the horns or muzzle, you can become a financially successful and prosperous person.

The Empire State Building is nearly 400 meters tall and has 102 stories. The 1931 building is crowned by a mooring mast. The skyscraper complex has a high-speed elevator and several glass-enclosed vantage points, including on the top floor of the skyscraper. From a bird’s eye view you can see not only all of New York, but also the neighboring states: Massachusetts, Pennsylvania, New Jersey, etc.

Despite the skyscraper’s name, it has never been the offices or offices of the Chrysler Motor Company. The building is in the Art Deco style, and yet connected to the famous car company: its spire is shaped like a radiator grille with numerous triangular windows. The facade is adorned by the Gargoyles.

A giant mall in Manhattan that also houses the offices of various media outlets, including you can skate here in the winter, or walk to restaurants and stores any time of year. The 24-hour Top of the Rock observation deck is open. The main part of Rockefeller Center is the 70-level RCA high-rise.

A building with an original shape that is often referred to simply as an “iron” (the facades of the house diverge in different directions, the structure has a sharp frontal angle). Look at the 82-meter structure from different angles and you’ll see a ship or a column in front of you. In the 20th century, the building served as the seat of the Russian Consulate.

The construction date of the structure is 1883. The steel bridge is decorated with towers of stone connected by Gothic arches.

Chaliapin, Domingo, Caruso, and Caballé once gave concerts here. On today’s stage of the greatest opera in the United States, there are also only internationally renowned stars.

19. The Metropolitan Museum of Art

The short name of the complex is the Met. The permanent collection holds more than 2,000,000 objects of art: photographs, musical instruments, outfits, weapons, armaments, and ancient artifacts.

The exhibits are housed in the original cylindrical structure. The exhibits are works of contemporary art. The museum was founded by Guggenheim, a famous gold miner. In the collections you can see the creations of such masters as Chagall, Léger, Mondrian, collected directly by the founder of the complex, and then his followers.

New York sights: what else to visit in New York City?

We have listed for you the main sights of New York in brief. In our opinion, of equal interest are also such sites as:

The sports center of the city, and home of its hockey and basketball teams. It’s not easy to get tickets here on game days. In addition to sporting events, it hosts politicians, public worship services, and circus shows (including Cirque du Soleil).

One of the most visited museums in the American city, made famous, among other things, by its library, which has descriptions of every expedition ever undertaken in the world. Guests can go to the movie theater (showing science movies) and the planetarium.

23. The Cathedral of St. John the Evangelist

A Christian church owned by the Protestant Church. One of the activists in its creation was F. Roosevelt (then not yet head of the United States). The date of its opening was 1941. The size of the complex, which can accommodate 5,000 parishioners at a time, is equal to two soccer fields.

One of the most beautiful neo-Gothic churches in the metropolis, with a sculpture of the Pieta, a bronze canopy, huge windows, an organ, giant spires and a white marble facade. Also of interest are the large bronze doors - each weighing more than 20,000 pounds. The capacity of the 1879 complex is 2,400 parishioners and the number of visitors per year is about 5,500,000 worshippers from around the world.

The former site of the Trade Center skyscrapers that were destroyed by terrorists in September 2011. The former foundations are now home to fountains, commemorating the many victims of terror. In addition, there is a museum whose exhibits detail the history of the great American tragedy of the 21st century. Nearby on the Hudson Riverfront is a monument to the starving.

Few hotels in New York City are as famous as this five-star establishment on 5th Avenue. The building dates back more than 110 years and houses not only standard rooms but also private apartments. The property is on the list of cultural and architectural heritage, but free entrance to the complex is open only to guests. Accommodation rates are consistent with the history of the Plaza.

Ellis Island is now home to the Museum of Immigration History. In earlier years the island served as a refuge for immigrants from various European countries.

The name of a peninsula in the southern part of Brooklyn. It used to be home to the largest entertainment center in America. Today it is also home to not only ocean beaches, but also numerous attractions, an oceanarium, and a Ferris wheel.

The crossing between Manhattan and Staten Island on this ferry is completely free. The average number of passengers per day is 70,000. A trip on the river will allow you to take great pictures of the Brooklyn Bridge and the Statue of Liberty.

Yellow cars plying the streets of New York City can be seen in many movies and TV series. As a reminder, these cars have the special right to “pick up” customers right on the street. You can’t call a yellow cab by phone or online. Every year, these cars bring over 200,000,000 passengers to their destinations.

We hope that those sights of New York City, photos with names and descriptions of which you have now seen, have aroused your interest. Making a walk in the American metropolis, you should visit them in person. 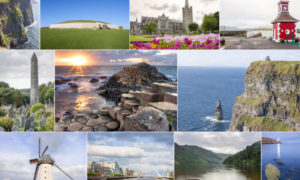